In the process of creating screenshots to accompany applications submitted to the App Store, you can include up to 5 images. Although the images can be anything you like, typically the images consist of screenshots of an application running in the iPhone simulator.

When you are releasing an iPhone app – after months of preparation, coding and designing –you are ready to submit it for approval.
App Store screenshots are crucial elements in the decision to buy or download an application. Taking iPhone screenshots for iTunes Connect app submission can be a painful and tedious job.

Usually there is a paid and a lite version of the app, and you have translated the app GUI into German, French, Spanish and Korean and English. So you have 2 versions x 5 languages x 5 screenshot slots = 50 screenshots. If your app supports also iPad, just multiply the last result by 2 = 100 screenshots. 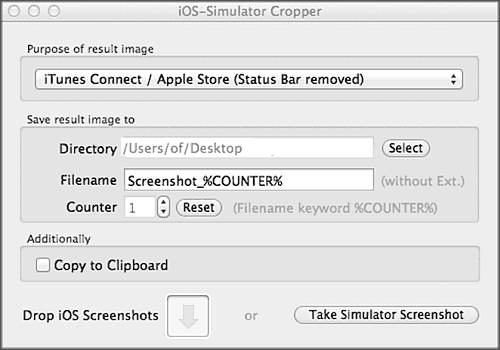 I think the case is clear that you need a tool to automate the process: iPhone Simulator Cropper.
It lets you easily & automated take screenshots of your app as it runs in the iPhone simulator.

You can also start the iOS-Simulator Cropper from command line. This can be useful to automate "screenshooting". Here is a thread about it at Stack Overflow.

Taking iPhone screenshots for iTunes Connect app submission can be a painful and tedious job. I used to take them on the real device and transfer them over to my Mac using iPhoto. I knew there MUST be an easier way than this!

There is. And it’s free. It’s called the iPhone Simulator Cropper. It lets you easily take screenshots of your app as it runs in the simulator on screen. Images are sized perfectly for app submission, including landscape screenshots. It even works for taking larger iPad shots.

Only available from archive.org iOS-Simulator-Cropper-v2.7.6.zip